Past President – In Memoriam 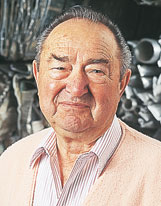 A native of Modesto, Harvey was born in 1921. He graduated from Modesto  High School in 1938 and Modesto Junior College in 1941, and served in the U.S. Army Air Corps during WWII.  Mr. Highiet worked in the family business since his high school days, and later became a partner with his father, Alex. He took over the company fully when his father died in 1980.  He was married to the late debbe Cohen of Los Angeles for 60 years, until her death in 2006. They had two children together, Jeff and Cathy.

The long-time President of the Company, Harvey passed away in early 2014. A memorial obituary about his life is posted on our Company website.